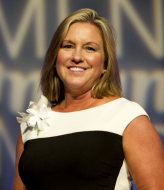 Not unlike other industry vocations, female sport professionals have often faced immense scrutiny when striving to carve out a career in male-dominated sports. The “first female” coaches, referees, managers, and administrators hired into male-focused sport operations (i.e. NFL, NBA) are often the focus of media attention when filling non-traditional roles within these organizations. This presentation will begin with a brief keynote address from Katie Sowers who is the second woman to accept a full-time coaching job in NFL history.  Following the presentation, Katie will be joined by a panel of other female speakers who have assumed similar career paths in male-dominated sports to share their journey and insights with attendees.

By the end of the presentation, attendees will be able to:

Katie Sowers enters her second season in the NFL and first with the 49ers as a seasonal offensive assistant. She originally joined San Francisco in June of 2017 as part of the 49ers 2017 Bill Walsh Diversity Fellowship, where she worked with the team’s wide receivers.

In 2016, Sowers spent the offseason/training camp in the same capacity with the Atlanta Falcons. With the Falcons, she worked closely with Atlanta assistant head coach/wide receivers coach Raheem Morris in organizing, conducting and concluding practice drills. Following her time on the field as a coach, she spent nine months as a scouting intern with the Falcons.

Sowers joined Atlanta after spending two years (2014-16) as the athletic director of the City of Kansas City. A former member of the 2013 United States Women’s National Football Team and a player herself in the WFA (women’s football alliance) for eight years, Sowers earned her master’s degree in kinesiology with an emphasis in pedagogy from the University of Central Missouri in 2012.

Kathy Nelson works to promote Kansas City sports locally and nationally with the goal of attracting, retaining and facilitating sports events and organizations. She helps the bi-state region realize the economic, social and community-building benefits of sports. In 2016, Nelson was selected to serve on the National Association of Sports Commissions Board of Directors.

Nelson has become a leader in Kansas City and was recognized in 2017 for her accomplishments when she was honored by the Kansas City Business Journal as one of the Women Who Mean Business. The Kansas City Star included Nelson on their list of 20 Most Influential Sports Figures in Kansas City placing her at number five behind Clark Hunt, CEO/owner of Chiefs, Dayton Moore, Royals general manager, Peter Vermes, Sporting Kansas City’s coach/technical director and David Glass, Royals owner. In November 2017, Kathy and the Sports Commission were honored as Sports Commission of the Year from Compete Magazine. Nelson kicked off 2018 by receiving the Sports Tourism Executive/CEO of the Year award, a national honor. She was also named to Kansas City Business Journal’s Power 100 list and was named Grand Champion at the Dancing with Kansas City Stars benefiting Cristo Rey.

Each year, since Kathy was named president, the Sports Commission has attracted and created an increased number of events that help to enrich the quality of life, foster economic impact and elevate the profile of Kansas City. The organization also continues to impact the lives of Kansas City residents by providing them opportunities to change their lives. Whether it is giving a scholarship to a young girl to allow her to attend Camp WIN and learn the lifelong lessons of confidence, teamwork and resiliency that sports can teach or providing training runs to help someone finish their first 5K, the organization is making a better Kansas City through Sports.

Prior to the KC Sports Commission, Nelson served in senior management roles in marketing, sales and promotions at Time Warner Cable and Metro Sports and held a number of roles at FOX 4/WDAF-TV in Kansas City including creative services manager, producer, reporter and editor.

Along her career path, Nelson has received numerous Telly, Emmy and cable television awards for television production, specifically sports production. She was the first woman to win a regional Emmy for the production of an NFL game in the early 2000’s. She attended Truman State University.

Nelson continues to be a featured speaker for numerous organizations such as various local city chambers, rotary clubs, universities and other miscellaneous community events. In her free time, you can find Nelson volunteering in the community. She is married with two very active daughters who are also involved in volunteering and participating in their community.